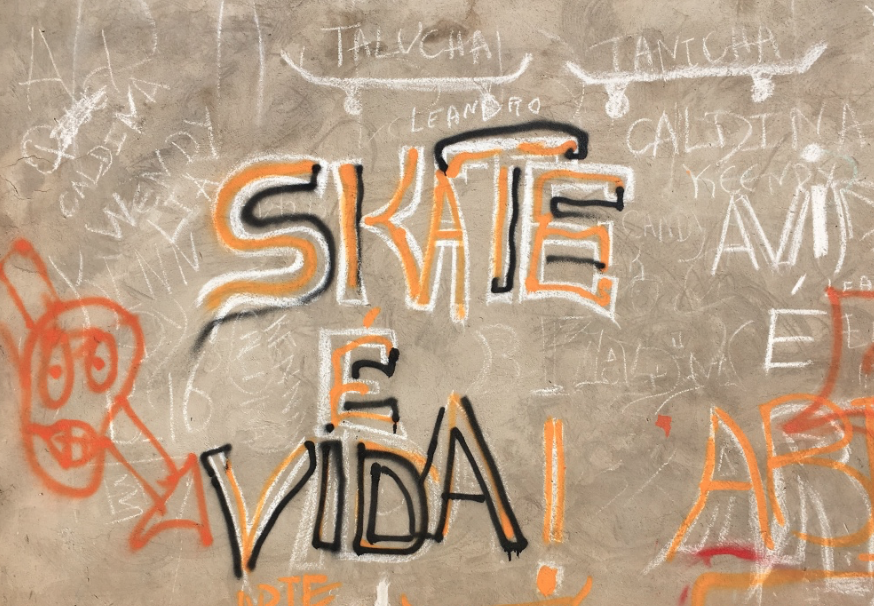 With the support of Davis Projects for Peace, the Skateboarding Association of Mozambique (ASM), and Skate-aid, I spent the summer of 2017 building Meninanda, Mozambique’s first skateboarding club for girls. My project’s goal was to use skateboarding as a tool to promote peace, balance, and self-awareness in the lives of young girls aged 7-17 in the Maxaquene C neighbourhood of Maputo, Mozambique.

Through art workshops, film sessions, and skateboarding lessons, Meninanda contributed to ASM founder Isard Pindula’s efforts to creating a space where local youth could skateboard, do their homework, create art, exchange ideas, and seek mentorship. Meninanda’s girls-focused inaugural month culminated in a collaborative mural project painted by the youth of ASM as well as with a launch party in which members of the Maxaquene community were invited to celebrate twenty-five epic skateboarding individuals who also happened to be their (grand)daughters, nieces, cousins, sisters, peers, and friends.

This project was designed as a collaborative project between myself and Isard Pindula, founder and president of ASM. Our main objectives were to:

Our challenges consisted primarily of gender dynamics, budgeting, and resource scarcity. A costly and time-consuming customs process delayed the delivery of new skateboards and ramps, which left us with only eight skateboards for over 30 kids for the duration of my project. Boys would enter the skate park during girls-only skate sessions, which at times caused tension between genders. We addressed this challenge by having ongoing conversations with the kids whenever we noticed gender-based hostility, promoting the idea that “loving me doesn’t mean hating you.” We also established ground rules and guidelines that we would remind the students of before each skate session. We also organized the park and distributed skateboards evenly between beginners and intermediate/advanced skaters, encouraging older skaters to lead younger ones.

How do you define peace?

Growing up, I used to define peace by what it was not. I defined it as the absence of conflict, war, and struggle. This is similar to how I’ve historically defined freedom: as freedom from discrimination, freedom from fear, freedom from negativity. My experiences in Mozambique showed me that defining concepts such as peace and freedom in the negative limits our ability to recognize them as active verbs rather than just static nouns. Peace for me is thus defined as the presence of joy, tranquillity, compassion, collaboration, and harmony. To embody peace is to choose to act with love, patience, and compassion towards both oneself and others. In this way, peace can also be understood as a decision to embrace life not in spite of failure, but because of it.

How does or will your project contribute to peace? Short-term? Long-term?

Using skateboarding as a vehicle for female and youth empowerment, Meninanda promotes peace in Maputo by creating spaces where young girls can learn, play, and build community. In a city rife with unemployment, corruption, and sexism, Meninanda – Mozambique’s first girls skateboarding club! – provides young girls with an activity that doubles as a fun hobby as well as an educational and community-building tool. My project’s focus on gender catalyzed a lot of conversation for Maxaquene’s youth as well as for older skaters for whom women’s involvement in skateboarding and sports overall was still highly unusual. In just five weeks, my project has opened a lot of eyes, minds, and opportunities for girls skaters in Mozambique.

In the short term, Meninanda promoted peace in the lives of 25 young girls and their communities. The girls have become much more adept and organizing and running their all-girls skate sessions, learning important leadership skills that they will carry with them for the rest of their lives.

Many of the boys have re-committed themselves to their studies, which in the long term will improve literacy rates and reduce crime. By the end of my project, boys and girls at ASM were treating one another with more patience and compassion. My project also physically transformed ASM headquarters by reorganizing the space, putting children’s art on the walls, painting a mural in the skate park, and purchasing new ramps and skateboards. In the long term, by promoting skateboarding to Maputo’s young girls, Meninanda will have helped produce an entire generation of female skateboarders in Maputo and in Mozambique. My hope is that this project continues to grow and contribute to the overall sense of inclusivity, peace, and respect in Maputo’s skateboarding community.

Has your project changed the way you think about the world? How has it changed you?

Meninanda expanded my understanding of peace as well as of survival. In Maputo, I realized that one of the biggest differences between growing up in the USA compared to a country as poor as Mozambique is that there is little to no room left outside of acts of everyday survival such as working, eating, and tending to siblings. This focus on surviving rather than thriving can negatively impact children’s emotional, psychological, and even physical health and development.

Meninanda was also my first time designing and directing a project and budget of this magnitude. It was a challenging but ultimately rewarding experience that taught me a lot about myself, international development work, and community building. Though my project cannot address the underlying reasons behind illiteracy, poverty, sexism, and inequality, it offers an opportunity for peace and respite by providing a cathartic outlet for feelings of stress, anxiety, and ennui. Most importantly, it cultivates space(s) where young people can come together and build community through skateboarding.

Note: Meninanda’s co-founder Isard Pindula passed away on 9 July 2019. Since then, there has been a lot of organizational leadership changes in the Mozambican Skateboarding Association (ASM), which caused me (Kava) to be left out of future planning efforts. Unfortunately, no one took over the local leadership of Meninanda, and many girls left the program after Isard’s passing.

To honor Mozambique’s female skaters and Isard’s lifelong efforts to promote skateboarding and extreme sports in Mozambique, Kava Garcia Vasquez (creator of Meninanda) decided to expand Meninanda to all of Mozambique. She also encouraged the Angolan skateboarding community in Luanda to adopt the term.

Two organizations that currently use the “Meninanda” term are the Matola Skateboarding Association and Maputo Skate. I would like for more organizations and programs throughout Mozambique and the Portuguese-speaking world to use the term “Meninanda” to describe their girls skateboarding group or program. My hope is that the Mozambican skate community continues to grow and become more inclusive for women and people of all genders, religions, and socioeconomic classes. May we continue to honor Isard’s impact on both Mozambican and African skateboarding history.